Saddle up for the next big Black musical. Set in a small town in the northwest of Western Australia in the 1960s, Panawathi Girl overflows with wild joy as hippies and cowboys, politicians and protesters fuel an all-singing, all-dancing night of entertainment.

Written by David Milroy, the much loved playwright behind Waltzing the Wilarra, and featuring an all-star cast of WA talent, this music-filled journey is brimming with heart and humour. Follow our heroine Molly Chubb from the big smoke back to the small country town of her birth as she searches for her place in the world.

Set amidst a time of great political change, this bold new production from Yirra Yaakin will have you questioning if much has changed at all, even as it has you tapping your toes and yearning for more.

The interview was done by Malti Elliott with Laila Mcguire.

Treasure Island The Panto at Garrick

The ingredients for a traditional English pantomime are quite simple.  Take a large man dressed unconvincingly as awoman;  a lissom young woman dressed as a boy;  two intellectually challenged bods called Willy and Nilly, Hustle and Bustle, Hither and Yon, or something similar;  add in lots of music, slapstick and broad humour of the slightly Carry On sort and you have two hours of glorious fun for all ages.

Audience participation is required (Oh no, it’s not! – Oh yes, it is!), disbelief must definitely be left at the door and this uniquely British entertainment can be enjoyed by the young and young at heart.

As a tradition, it can be traced all the way back to the Commedia Dell’arte of sixteenth century Italy, although as we now know it has developed many modern conventions.

This tradition is alive and well at the Garrick Theatre (named for David Garrick,who revolutionised theatre into the form we know today).  In 2019 they produced the multi-award winningPuss in Boots and the Christmas offering this year is Treasure Island – The Panto by Ben Crocker.

Directed by Douglas Sutherland-Bruce (who also directed Puss in Boots) it conforms very much to the traditional British standard, this time focussed around the much-loved classic by Robert Louis Stevenson Treasure Island, with a wonderful villain in Long John Silver (Rob McDonnell) trying to outwit Mother Hawkins (Gavin Crane, making a repeat performance as the Dame) and his young lad, Jim (Olivia Fellows); the Squire (Ken Harris) and his delectable daughter, Jenny (Katelyn Barr) all while searching for a fortune in gold.

In this he is aided by his aged parrot, Polly (Fiona Forster); a gang of pirates and the ladies of the Smugglers Cove Women’s Institute, who have gone buccaneering for a lark.

Musical Direction is by Christopher Steicke and chorography is by Sophie David.

Director Sutherland-Bruce:  ‘Panto is important, as it is often the very first time children are exposed to live theatre in any form.  Laurence Olivier, Maggie Smith and Judi Dench all have said that the first time they saw theare was a Christmas Panto and it changed their lives.  Also it’s a lot of fun – hard work and fun.’

Full of song, dance, ghosts, laughter and the purest kind of entertainment Treasure Island The Panto opens at Garrick Theatre, 16 Meadow Street, Guildford on Thursday the 18th November and runs until December 11th, matinees at 2:00pm and evening shows at 7:30pm.

The interview was done by Chris Durrant with the director of the pantomime Douglas Sutherland Bruce.

This is no battlefield drama or period piece. Holloway’s war is played out in the here and now, in kitchens and classrooms, boardrooms and bars. A big play about big things.

Beauty and the Beast

Disney Beauty and the Beast is coming to the Regal Theatre from 27 March for four magical performances.

Iona’s performing arts students invite audiences to “Be Our Guest,” as they bring this heart-warming tale to life, with extravagant dance numbers and an award-winning score. “The music is enchanting and brings back the memories of watching the magical Disney film as a little girl,” said Tabitha Kerlin (Belle).

“What I love about the dance numbers is the way in which our talented choreographer, Coby Brant, has created magical and fast paced numbers, filled with energy – there is never a dull moment!” said Jessica Cullity (Mrs Potts). Based on the Academy Award-winning animated feature, the stage version includes all of the original songs written by Alan Menken and the late Howard Ashman, along with new songs by Mr. Menken and Tim Rice. It was winner of Best New Musical at the 1998 Olivier Awards and was nominated for nine Tony Awards, including Best Musical.

“It is a beautiful and energetic musical with a wonderful sentiment; there’s more to a person than what meets the eye,” said Eliza Chaney (Lumiere).

The musical tells the tale of a selfish prince who is magically transformed into a hideous beast as punishment for his unkind ways. To avoid remaining a beast for all time, he must break the spell by learning the meaning of true love. 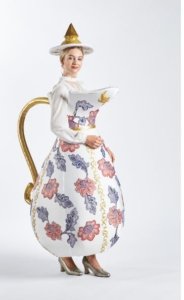 “Belle brings out the best in the Beast, teaching him to be kind and to follow his heart. The unique bond shared between the two is an example of how one shouldn’t judge a book by its cover,”said Tabitha Kerlin (Belle).

“The energy, talent and enthusiasm the cast have for this production, along with the experience and innovation of the creative team, will ensure this is a highly entertaining show for all ages,” said Joshua Brant, Iona’s Director of Performing Arts.

Iona has a decade-long history of producing exceptional musicals at the Regal Theatre. For your chance to see this family-friendly and heart-warning show, visit ticketek.

“Spectacular costumes, familiar tunes from the original Disney movie, massive dance numbers and a story with warmth, humour and romance; that is what our audiences have to look forward to,” commented Joshua Brant.